This post does contain affiliate links but all opinions are honest and my own.

Here are a few tried and tested gifts I’ve either given or been given on special occasions:

Sephora Gift Card – This is the easiest gift a guy can buy for his girl. But make sure it’s not the only thing you get her. Put A LITTLE thought into it. And make sure you tell her she doesn’t need make-up to look beautiful because you can screw yourself over on this one.

Dinner Cruise – We’ve done the Odyssey cruise around the Boston Harbor and it was a really good time. It is a little expensive and probably extremely expensive on Valentine’s Day but you can purchase a gift card voucher.

Try the World Subscription – I thought this was a good gift for those that love both traveling and food so I bought my husband a year’s subscription for Christmas in 2016. 90% of the items we’ve tried so far are delicious. We got a bunch of mustard items in one package and those have gone unopened so the challenge is utilizing everything they send you. With a discount code I found, it was ~$18/month. You definitely get your money’s worth.

I think my favorite was the Thailand box because it included tom yum soup, green curry paste, and Thai iced tea. The last box of our series was from Africa and the tea was out of this world. I’m a big tea person so trying teas from all over the world has been amazing. The mushroom risotto from Italy was also yum.

Clearly, this box ended up being more for me than him because he’s too busy to utilize the ingredients. They used to offer the items sold individually on the site if you especially liked something but they don’t anymore. Some of the items can be found on Amazon. I definitely recommend this (and I have no affiliate links for this).

NatureBox subscription – This would make a good gift for the health conscious people in your life or those trying to change their snacking habits AKA all those people with New Years Resolutions to get in shape. My husband got this for me for my birthday one year when we were still dating. When I first opened it, I thought this isn’t a very thought through gift. But he said he was giving me what I love most in life: FOOD. He knows me so well <3. He bought me a subscription for 5 snacks/month for 6 months. There were some hits and there were some misses but they’ll credit you for the snacks you don’t like which is a big win (I don’t think that was a policy back then).

They did discontinue my favorite snack but they still have the lemon tea biscuits I really enjoyed. The dark chocolate almonds were really good too. I definitely wasn’t ordering the healthier items. Below, I’ve linked some discounts they’re offering now.

Scratch Ticket Bouquet – This is a good idea for the girl in your life that says she doesn’t want a bouquet of flowers for Valentine’s Day. When I did this for hubs, I spent $50 on scratch tickets and he made $48 back so it may be worth the gamble. 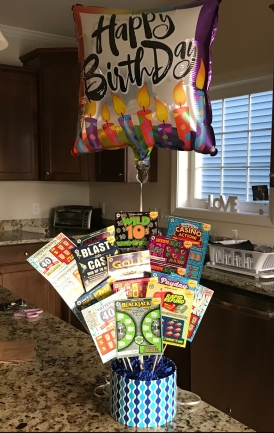 Shutterfly Mug or Custom Item – I love our custom mugs and I use mine constantly. I had them made at Shutterfly but now there’s tons of other websites that do the same thing. My husband has his mug at his parents’ house and puts his pens in it…so that was a bust. Not a good gift for guys, but the girl in your life will at least appreciate it.

Date Night at Home Basket: I have not given or been given this gift before but I would personally love this *hint hint.* Buy two bottles of wine (because one isn’t enough), some cheese/snacks and games and put it in a basket. Two card games I suggest are: What Do You Meme?

(but it requires 3+ players) and Monopoly Deal

(2+ players). I’ve played Monopoly Deal with people before and it was a lot of fun and it can be played in 15 mins unlike Monopoly the board game or should I say bored game!

– This is a gift for both of you if you live together and have just one bathroom. The commercials are hilarious:

And yes, it really works.

What’s your favorite gift you’ve ever received? Leave a comment below!

Welcome to my Blog!